As a troop, we have already gotten through the summer and our first meeting is coming up next week! Here is my rough agenda for the school year - including the field trips and service projects. Keep in mind that we are trying to encompass a few different areas of the Scouting mission: work with a journey book to build their minds and guide the lessons, give back to the community, doing things for other people AND keep it all fun!


·         Intro meeting – talk about our Journey this year as we go on a “Road Trip” with our Daisy friends. They will get their journey books, talk about awards to earn and our field trips to take review the flower friends, explain the Daisy Meeting Wheel, make a Christmas Carol List that we all know, make a button with the Girl Scout law on it (they can wear on their vests), and the Flower Snack.


October
·         Getting Ready for the Road – learn about our own feelings, learn what you say to people when they take a trip, get their road trip journey base patches, make bookmarks, role play resolving conflict (easy with their school's Caring Bridge example), sing a Christmas Carol. And, Stem snack.
·         October 14th :  Fire Station Open House, 8-3PM. We are looking at a 30 minute “helper shift” and then, to enjoy the festivities J


·         Our Road Trip Begins - learn about other people’s feelings, learn what you say to people when they take a trip in French, Learn about different types of soil from Jung’s Garden center (maybe a guest), talk about littering and make a Frankenstein Can Craft, and role play  on how I help my friends. Sing a Different Christmas Carol, and Leaf snack. ***All girls will need a clean, empty soup can. I have a toplifter can opener if you don’t so they will have NO sharp edges on their final project. J


November
·         You, Me, How Different We Can Be  - learn about other people’s feelings, learn what you say to people when they take a trip in Spanish, Learn how plants drink, explain our “Feast of Plants” for snacks over the last few meetings and “Color-A-Carnation Craft” to take home. Talk about nature’s colors and make a Hand print Turkey Craft. Role play on how I feel and you feel, earn the Blue Bucket Award. And, Root snack.


·         Living the Law, and So Many Seeds – learn more about the Girl Scout Law, learn what you say to people when they take a trip in Chinese, talk about seeds (like those of our flower friends) and how they are just baby plants waiting to grow, Toilet Paper Butterfly Craft, role play how I feel and you feel. And, Seed snack.
December


·         Special Skills, and Textures Too – learn the diversity of textures in nature, lean what to say to people when they take a trip in Japanese, paying attention to our special skills, learn about reflection (water and stone project), think about different shapes in nature (too cold for a nature walk!) Talk about winter and how to help nature with a milk jug bird feeder craft and a snack. **All girls will need a clean, empty milk jug for this craft. I will cut them, they will decorate and assemble.


·       Bonus meeting– Cookie Awards Ceremony **
12/20 Caroling at Senior Center and passing out mini cookie boxes! (I send them with a little gift for them all to open at Christmas/holidays – A Daisy Hair Clip/barrette!)
January


·         We Have Skills and So Do Plants! - learn more about our special skills and those of plants, learn what you say to people when they take a trip in Italian, girls earn their Firefly award, We will talk about how the snow is like water to the plants and make a Snow Measuring Stick Craft.  Also, Snack.


·         Field Trip! à To a grocery store to talk about LOCAL foods that we will talk about in the next meeting. (cheese, apples, milk, corn, etc)
February


·         In the Land of Milk and Cheese – review all ways to say “Have a Good Trip”, the Flower Friends Visit Wisconsin (yippee!) learn about how different foods affect our bodies (sleeper foods like milk/cheese/turkey and wake up foods that they share from their experiences) talk about textures and a Valentine Heart Craft. Start thinking about their Clover Project. (a play, posters for a school or library, a community planting project, litter pick up, etc) A string cheese snack would be PERFECT!


·         When the Flowers Meet the Trees – learn about different kinds of trees (Spruce, Pinion and Chestnut – then classifying them into deciduous and conifers), Making Bark Rubbings, talking more about our Clover Project, touching on recycling and making a Pop Top Friendship bracelet Craft. Hot chocolate would be PERFECT for the beverage person-- I can bring hot water. **Parent note: If anyone has a fireplace, bringing a log or two with bark on it would help us with the rubbings – it will be too cold to go outside to trees to do it. J
March
·         Protecting a Natural Treasure – We start work on our Clover Project. Shamrock card from stamping with Bell Peppers Craft, and Snack.


·         On the Road To New Adventures – We review the blue bucket and firefly suitcase. Girls review their clover project and earn their award, craft is girls signing each other’s Journey Books and a group picture!
May
·         Field Trip! àTV station (this will be on a Saturday)


·         Bridge Ceremony – let’s make this really special for all of them! They will get their special Bridging award in a clear, ribbon tied baggie. It would be great if all Moms (and any other family members that want to) could attend. I will bring Daisy Cookies – we will have a party sign up like Brownies, etc. J

That's it - my whole year roughed out. I hope it helps someone make their own plans...I will be posting each meeting/event as they happen.
Posted by Dannelle at 10:00 AM No comments:

Planning Out the Year

I sat through all the training that spoke about girl driven/led, etc concepts.
Super!
One thing: These girls are 6.

I have helped out actively in my daughter's classes for the past three years and know we are taking a LOT of energy, a short attention span and still, the need to be included. 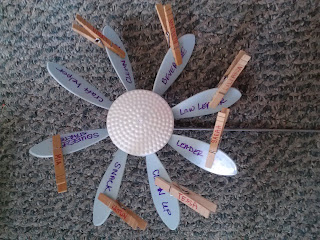 I found the pinwheel at the local home improvement store on summer clearance - $1.00
A sharpie let me label the petals with the simple tasks from each meeting:
The girls names are on clothes pins and simply get rotated around.
Delegating a bit helps me keep things straight.
:)


Encourage Scientific Minds This is the goal of the new Journey book we are using: Between Earth and Sky. I picked it because girls are SOOOO discouraged in science and fostering that love for it now is so precious!  It is broken down into 10 sessions and is important, as so few girls are encouraged in science. It takes an observational approach in nature. We will also be talking about feelings, and being aware of what other people are feeling...both things that their school does fantastically in the sense of community that they create.
Now, let's talk snacks.
Last year, the girls really got sugared up after their meetings -- so close to bed time. This year, we are talking HEALTHY treats - just like the new guidelines for the schools.


As we will be talking a lot about plants, etc – it might be fun to keep the snacks on the same concept for the first five meetings:
·         Flowers = Broccoli, cauliflower, etc
·         Stems = Celery, asparagus, etc
·         Leaves = Lettuce, spinach, Kale, Cabbage (our turn for this and we were planning on making Kale Chips)
·         Roots = Carrots, radishes, etc
·         Seeds = Sunflower, Pumpkin, etc
They can get as creative as they want and it’s OK to bring dip/ranch or whatever for their snack.
OK ... we are getting off to a great start!
Some things I wanted for every meeting, as consistancy is AWESOME:

Sooo I Am The Leader!

Not sure how it happened, but I became the new leader to my daughter's Daisy Troop!
After I thought about it for a bit, I came up with a plan:
We had four girls.
As amazing as those girls are, I thought it would be MORE fun, if we had a few more. Like at least twice as many. I think back to my scouting days and remember our troop of 10-12 gals... it was a BLAST!

Increasing troop size was easy - I put a simple note out to all the kindergartners before school closed for the year. We picked up four more girls, which doubled our troop! We have 7 first graders and 1 kindergartner (who is a sister of a first grader). A SUPER sweet bunch of kids!

Now, for adding some summer fun. Our troop had about $5 in it's account, so things had to be CHEAP. I planned out one thing a month over the summer:
In June, we took a simple tour at the local video store. They all got FREE rental passes (tied into report card time). After that, we zipped over to Culver's and had FREE custard, as I still had a ton of passes in my gift card box.

In July, we had a pool party at my Mom's house. Everyone brought some treats and they swam like you wouldn't believe. We made it a whole family affair - it was a hoot!

In August, we had a few of the mom's and a few tents in our backyard. Keep in mind that our troop is a giant bunch of school chums - most who have already known each other for a few years between 4K and dance classes. Everyone pitched in with snacks, dinner items, breakfast waffle stuff - we did an outdoor scavenger hunt and even showed a princess movie on the back of the garage! Again, Free to the troop!

I did pick up "fun patches" for each event, out of my own pocket, until we get a  positive balance from cookie sales. I have the receipts tucked in the troop fund booklet and had to see what else I could do, on the cheap, until we were in a better financial shape.

Now... to plan out the year.
I think that deserves an entire post of it's own - don't you?
Posted by Dannelle at 10:00 AM No comments: 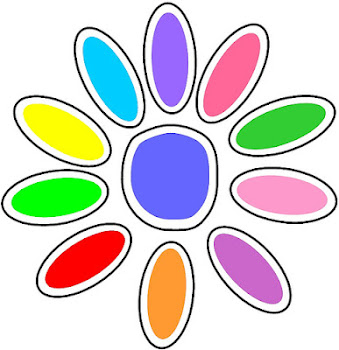